The Three Sisters Wilderness covers an area of 281,190 acres, making it the second-largest wilderness area in Oregon.  It borders the Mount Washington Wilderness to the north and shares its southern edge with the Waldo Lake Wilderness. The area includes 260 miles of trails and many forests, lakes, waterfalls, and streams, including the source of Whychus Creek. The Three Sisters and nearby Broken Top account for about a third of the Three Sisters Wilderness, and this area is known as the Alpine Crest Region. The Three Sisters form the center of a region of closely grouped volcanic peaks. Although they are often grouped together as one unit, the three mountains have their own individual geology and eruptive history. Neither North Sister nor Middle Sister has erupted in the last 14,000 years, and it is considered unlikely that either will ever erupt again. South Sister last erupted about 2,000 years ago and could erupt in the future, threatening the region.

Broken Top is a glacially eroded complex stratovolcano. Broken Top joins several other volcanoes in the eastern segment of the Cascade Range known as the High Cascades, which trends from north–south. This includes the Three Sisters complex, Belknap Crater, Mount Washington, Black Butte, Three Fingered Jack and Mount Bachelor. There is  a wide variety of plant and animal life, and the weather is just as diverse. Frequent snowfall, occasional rain, and extreme temperature variation between seasons are the norm. Broken Top and its surrounding area constitute popular destinations for hiking, climbing, and scrambling. 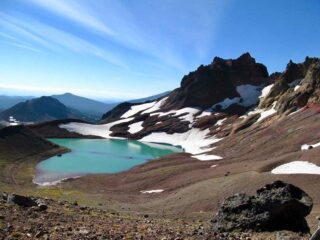 Broken Top and the nearby Three Sisters represent a popular climbing destination for hikers and mountaineers. You need to get permits from the United States Forest Service starting on Memorial Day up until the beginning of September and dogs must be kept on leashes on the Green Lakes, Moraine Lakes, South Sister, Soda Creek, Todd Lake, and Crater Ditch trails from July 15 through September 15. Horses are prohibited, and ice axes are required during the winter climbing season for safety reasons. Motor vehicles and other mechanical means of transport such as bicycles, wagons, motorboats, and helicopters are generally prohibited within the Three Sisters Wilderness under the rules of the National Wilderness Preservation System.  To gain access to the Obsidian area of the wilderness, special entry is required and those permits are available from Memorial up until Halloween, for both day and overnight hikers. These passes are distributed only at McKenzie Ranger District in Willamette Forest and Sisters Ranger District in Deschutes Forest. Vehicles are prohibited.

The hiking trail on Broken Top begins at the Green Lakes Basin at the trailhead east of Bend, running 12 miles and gaining 3,450 feet in elevation. It can be scrambled, though the route demands Yosemite Decimal System class 4 or lower class 5 climbing and has significant exposure. The Broken Top trail begins at a junction with the Green Lakes Trail. It runs for 0.8 miles to Crater Creek, including 0.5 miles of trail that passes right by the volcano and Crook Glacier. There is also an unofficial trail that runs up the moraine of Crook Glacier. The northern slopes of Broken Top can be accessed by trailheads north of Tam McArthur Rim, while its southern slopes can be reached by trailheads near Crater Creek 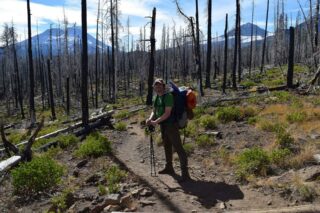 The loop around the Three Sisters is rated as one of the best in Pacific Northwest and adding Broken Top loop on top makes it even better. The east section between South and Middle sisters is the same as east section around Broken Top from Green Lakes so it is an easy add on.  The 46-mile circuit of trails around the third-, fourth- and fifth-highest peaks in the state is one of Oregon’s great multi-night backpacking opportunities — and one that gives you plenty of those in-your-face views. Broken Top trail then takes you up and close to the famous glacier lake below the mountain and breathtaking views of the volcanic surroundings. We did these trails as two trips but I would recommend do these as one and loop around not just Three Sisters but also Broken Top.

Starting from the  Lava Camp Trailhead near Matthieu Lakes, we headed clockwise, to get the burned out forest section out first. You are hiking parallel to North Sister towards Middle Sister with South Sister and Broken Top directly in front of you. The views are great around this whole section, although it is depressing to walk so many hours through the burned forest. The alternative would be starting at Pole Creek Trailhead and leave this section as last. Soon after passing this alternative trail, you found yourself at a junction. You can either continue straight, arriving to the common section with Broken Top going either south to Golden Lake and Green lakes (or continue on Broken Top loop towards McArthur Rim and No Name Lake) or take a cut off trail to the lake located between South and Middle Sister –  Camp Lake. That was our decision, and we capped 18 miles from Matthieu Lakes to Camp lake and spent the night there. This is one of the most beautiful lakes in the Three Sisters backcountry. It is also bit less popular destination to camp (opposite to Green Lakes or Golden Lake), we were the only group out there that night. The views from the lake is amazing; South Sister to your left, Middle and North to your right. From this spot you can traverse through the backcountry between the peaks and end up on the other side of the Three Sisters loop trail, which will take you back where you started. You can also continue south around South Sister, connecting with the Broken Top loop trail towards Green Lakes or No Name Lake. You could also connect to the Moraine Lake trail and even to the South Sister Climbers Trail. Another option is to start at the Obsidian trailhead on the east side. There are many options of trails navigating through this beautiful backcountry.

One thing to remember is that there is an “unmaintained” section of the trail around Broken Top between the McArthur Rim and No Name lake.  The trail is not shown on some maps and will instead show a trail on the north side of Broken Hand, contouring the Bend Glacier and No Name Lake. Note: the north facing slope between Broken Hand and the Bend Glacier may require a long, moderately steep, snow traverse. A faint, less-used trail bypasses the lake and Broken Hand on its south side. It connects the main trail about 0.3 miles below the lake and the saddle just east of Broken Hand. This trail can be hard to follow, but faces south, and it should be snow free earlier in the season. Keep an eye out for cairns.

As of 2019, there are no permits needed to camp at the wilderness, permits are free self issued at the trailhead. There is a plan however, to bring permit system in by the summer of 2020. 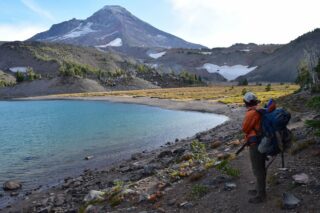 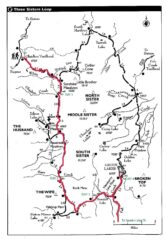