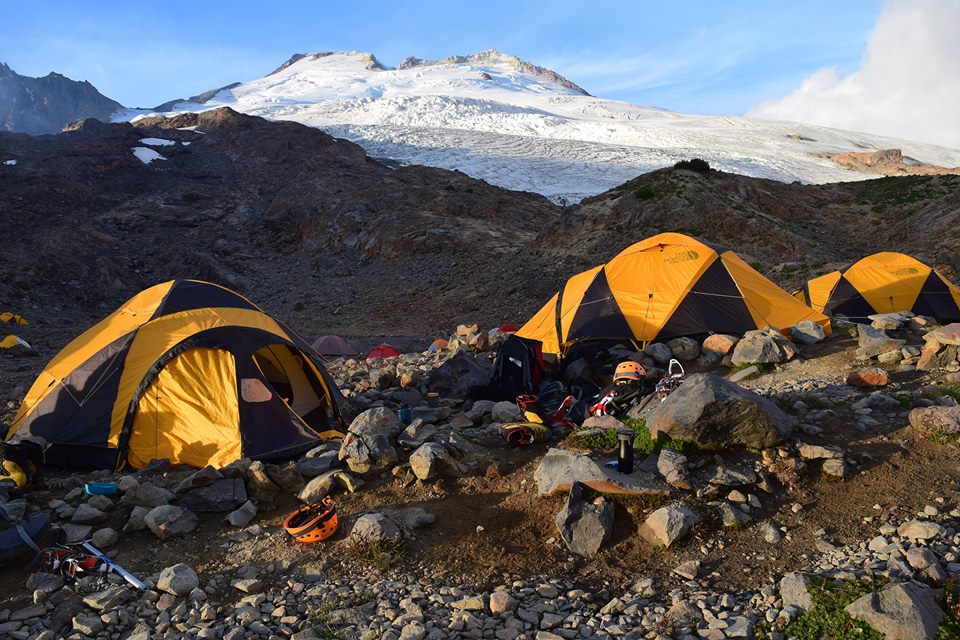 Mount Baker, known as Koma Kulshan or Kulshan by the indigenous people, is an active glaciated volcano in the North Cascades of Washington. Mount Baker has the second-most thermally active crater in the Cascade Range after Mount Saint Helens.

After Mount Rainier, Baker is the most heavily glaciated of the Cascade Range volcanoes; the volume of snow and ice on Mount Baker is greater than that of all the other Cascades volcanoes (except Rainier) combined. It is also one of the snowiest places in the world! At 10,781 ft, it is the third-highest mountain in Washington and the fifth-highest in the Cascade Range. Located in the Mount Baker Wilderness, it is visible from much of Greater Victoria, Nanaimo, and Greater Vancouver in British Columbia, and to the south, from Seattle (and on clear days Tacoma) in Washington.

Indigenous peoples have known the mountain for thousands of years, but the first written record of the mountain is from Spanish explorer Gonzalo Lopez de Haro, who mapped it in 1790 as Gran Montaña del Carmelo, “Great Mount Carmel”. The explorer George Vancouver renamed the mountain for 3rd Lieutenant Joseph Baker of HMS Discovery, who saw it on April 30, 1792. 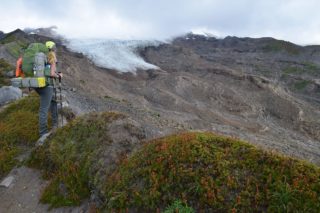 Mount Baker is one of the loftiest and most conspicuous peaks of the northern Cascade range; it is nearly as high as Mount Rainier, and like that mountain, its snow-covered pyramid has the form of a sugar-loaf. It is visible from from the Puget Sound as well as the southeastern part of the Gulf of Georgia, and likewise from Strait of Juan de Fuca. It is for these reasons a natural and important landmark.

Our trip started on Saturday morning, after meeting with our team in downtown Seattle. We drove to the trailhead at Schrieber’s Meadow on the south side of Mt. Baker. We spent most of the day on the moderately strenuous approach which starts at 3,400 ft. in sub-alpine meadows. The hiking continued through old-growth forest for the first two hours. At 4,800 ft. we left the old forest and entered snow-covered alpine meadows. At this time, the mountain was  deep in the clouds, but the Easton Glacier (on the bottom of the mountain) was visible for most of the approach. We arrived at Sandy Camp (6,100 ft.), a large clearing with room for dozens of climbing teams, access to clean water, and close enough to the ice to train on, in the afternoon. We enjoyed some spectacular views from camp of the Easton glacier while eating lunch/dinner and trained with our crampons and ice axes in a nearby snow field. 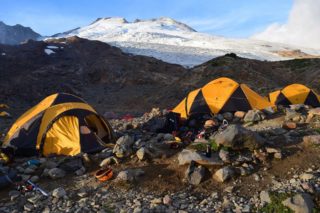 Sunday was summit day! We started our climb around 7am, as this late in season, crevasses were open wide on the glacier and it was easier to navigate through them with daylight. The route begins with a climb to the top of the Easton moraine at 7,000 ft., after which we traversed the Easton Glacier until reaching the crater rim at 9,800 ft. The final scramble up the Roman Headwall was the steepest and most difficult part of the climb, but afterwards we crested the summit plateau at just over 10,500 ft.  What made this climb so fascinating were all the crevasses littered throughout the mountain. Most were very deep, almost cavernous, and I was hypnotized at their beauty. I would have loved to have taken more pictures of the crevasses, but crossing them are very dangerous and so we had to be very focused with no distractions. Some had narrow, natural ice bridges we had to cross, and others we had to step, or even jump over. Definitely scary to think what would happened if you slip into one. That is why everybody is roped up and should possess at least some self-arresting skills. After crawling up the Roman Headwall, a  short walk leads up to the summit of Mount Baker, at 10,781 feet. The weather has been great the whole day, sunny with blue skies but very cold and windy on the summit. The view from the summit was great, we were able to see the summit pyramid of Mount Shuksan, which we climbed just a few weeks prior to Baker. After resting on the summit, we made our way down to Sandy Camp and enjoyed nice mac&cheese dinner, which honestly, was the highlight of the day. Overall, I thought Mount Baker was an amazing climb, although strenuous and very steep at times. They say if you want to climb Mount Rainier, climb Mount Baker first, so now we are excited to plan our climb to Mount Rainier next summer! 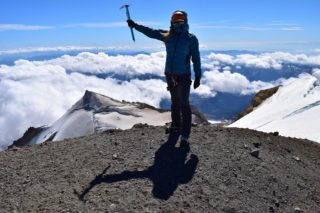