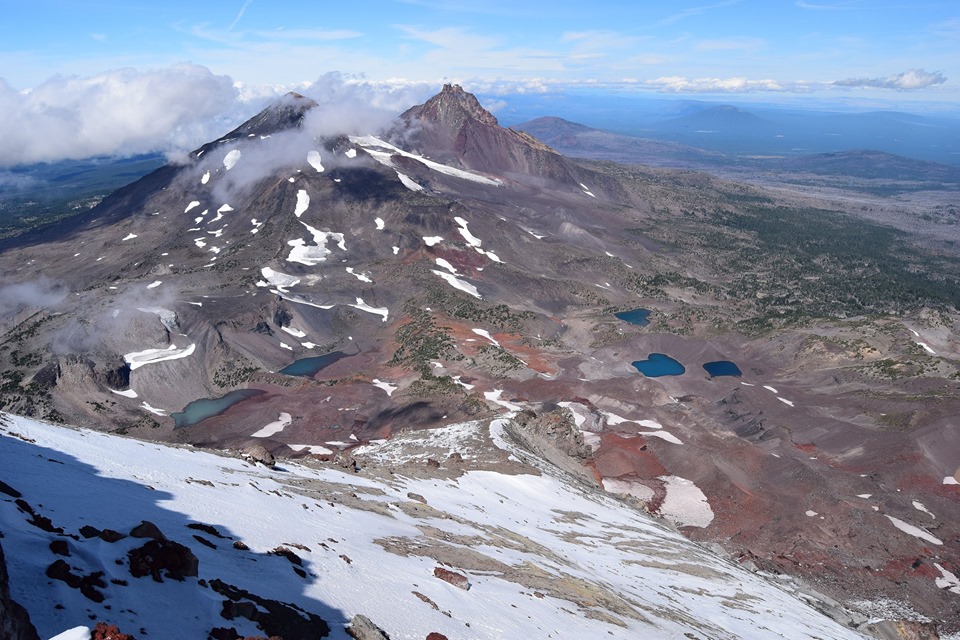 The Three Sisters are closely spaced volcanic peaks in the U.S. state of Oregon. They are part of the Cascade Volcanic Arc, a segment of the Cascade Range in western North America extending from southern British Columbia through Washington and Oregon to Northern California. Each more than 10,000 feet in elevation, they are the third-, fourth- and fifth-highest peaks in Oregon. Located in the Three Sisters Wilderness at the boundary of Lane and Deschutes counties and the Willamette and Deschutes national forests, they are about 10 miles south of the nearest town, Sisters. Diverse species of flora and fauna inhabit the area, which is subject to frequent snowfall, occasional rain, and extreme temperature variation between seasons. The mountains, particularly South Sister, are popular destinations for climbing and scrambling.

Although they are often grouped together as one unit, the three mountains have their own individual geology and eruptive history. Neither North nor Middle Sister has erupted in the last 14,000 years, and it is considered unlikely that either will ever erupt again. South Sister last erupted about 2,000 years ago and could erupt in the future, threatening life within the region. After satellite imagery detected tectonic uplift near South Sister in 2000, the United States Geological Survey improved monitoring in the immediate area. The Three Sisters and nearby Broken Top account for about a third of the Three Sisters Wilderness, and this area is known as the Alpine Crest Region. 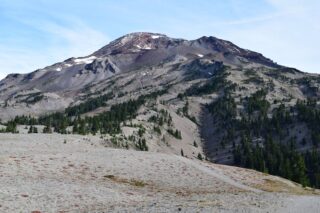 South Sister, also known as “Charity”, is the tallest volcano of the trio, standing at 10,363 feet. Unlike its sister peaks, South Sister has an uneroded summit crater about 0.25mi in diameter that holds a small crater lake known as Teardrop Pool, the highest lake in Oregon.

The Three Sisters are a popular climbing destination for hikers and mountaineers. 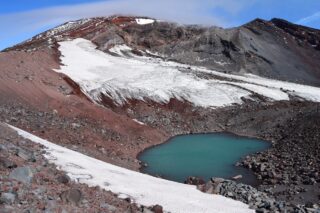 Due to extensive erosion and rockfall, North Sister is the most dangerous climb of the three peaks, and is often informally called the “Beast of the Cascades. One of its peaks, Little Brother, can be safely scrambled. Middle Sister can also be scrambled, for a round-trip of 16.4 miles and an elevation gain of 4,757 feet.

South Sister is the easiest of the three to climb, and has a trail all the way to summit. The standard route up the south ridge runs for 12.6 miles round-trip, rising from 5,446 feet at the trailhead to 10,363 feet at its summit. 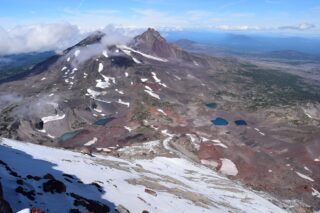 With our summer being super busy, we opted for September climb on South Sister. The weather in central Oregon is fairly mild and warm in the fall. We planned 3 day adventure for ourselves, with climbing South Sister one day and then connecting backpacking loop around Broken top on day 2-3. Driving the night before from Portland, we opted for sleeping in our tent at the trailhead by Devil’s lake, same as many others. The weather forecast for the following 3 days was sunny, clear but very, very windy.  We were woken up super early as the parking lot was buzzing with all the hikers and climbers getting ready. After consolidating all the gear we started at the South Sister climber’s trailhead. The hike starts with switchbacks for the first couple miles and then about a mile crossing across fairly flat plateau. Then the main event starts. The climber’s trail starts going uphill in switchbacks, mostly on scree and volcanic sand. After another mile and a half you reach the teardrop pool of glacier water, directly below the sister crater. This is a very nice place for a snack. You can clearly see the path to the summit crater, scree and snow covered. The final approach is the longest one, mostly because when you take two steps up you slide one step down every time. It was very windy and at this point, I was wearing all my layers and jackets that I had. We saw people who didn’t bring enough layers who turned around. Gloves and a hat was essential that day. We reached the summit crater about 5 hours after starting at the trailhead. It was nice and sunny when the wind died down and we took a nice break at one of the many wind shelters at the top. Then we skirted around the crater to the real summit. The views are just amazing. From Middle and South sisters, glacier lakes, Broken Top, Moraine Lake, Green Lakes and many others. We stayed at the summit ong enough for a few photos and turned around, as the wind was getting very strong. We were cold and there was a whiteout for couple minutes while at the top. The hike down was fairly fast, around 3 hours and easy. I was pretty proud of myself for not slipping or falling on the scree and snow. I would grade this hike as moderate, very similar to Mount St. Helens.