The Enchantments Thru Hike 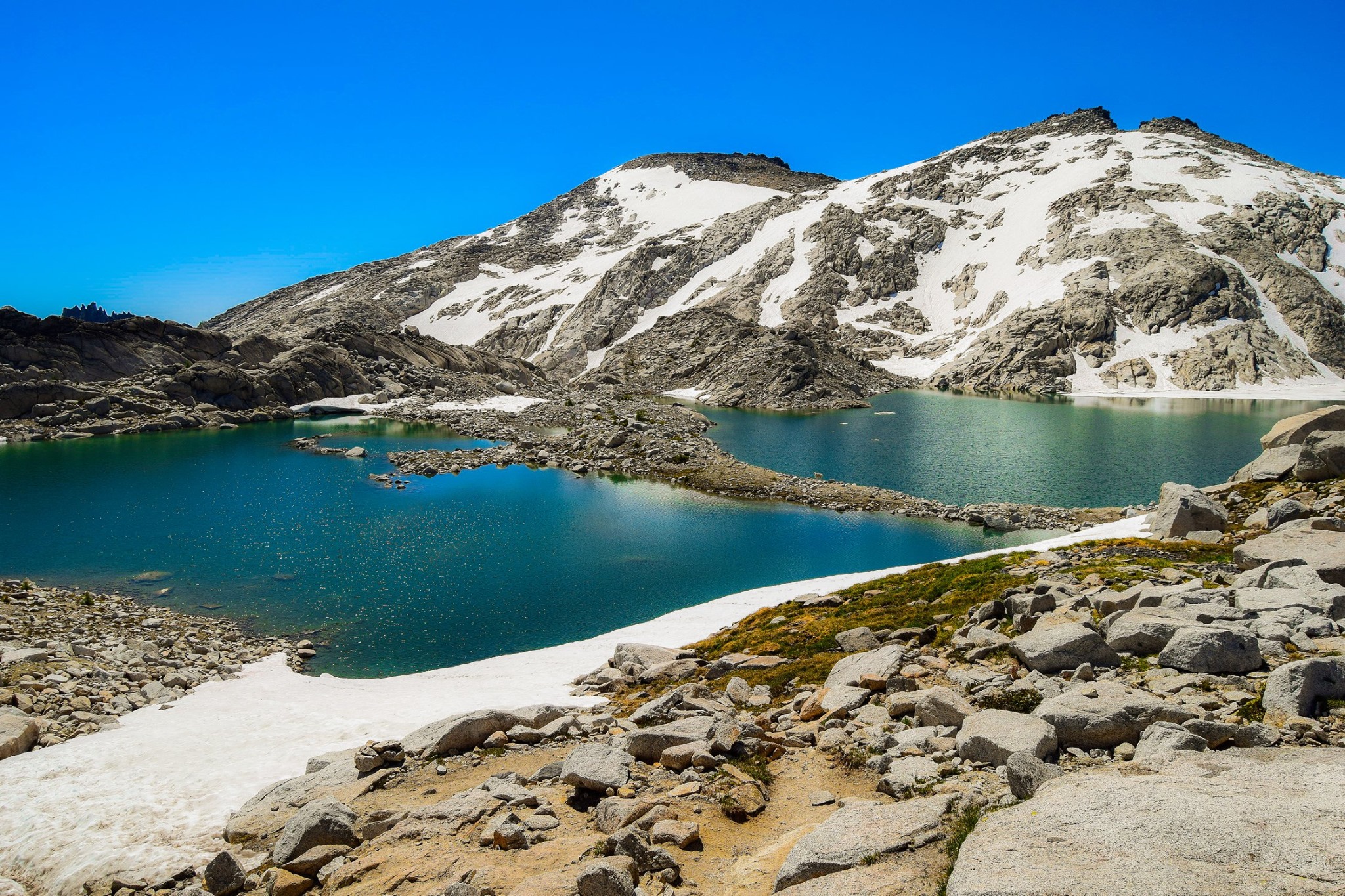 The Enchantments is a region within the Alpine Lakes Wilderness area of Washington state’s Cascade Mountain Range. At an elevation of 4,500 feet, it is home to over 700 alpine lakes and ponds surrounded by the vast peaks of Cashmere Crags, which rate among the best rock-climbing sites in the western United States. The highest peak, Dragontail Peak, stretches 8,840 feet high. The Enchantments area is located 15 miles southwest of the popular Bavarian-themed town Leavenworth, Washington.

There are two primary approaches to the Enchantments Basin. Both trail heads are accessed via Icicle Creek Road. The Snow Lakes trailhead is off Icicle Creek Road at a large parking lot next to the creek. The trail climbs 6.5 miles  to Snow Lakes gaining 4,100 feet. From Snow Lakes the trail ascends over sloping granite rock to the Lower Enchantments. The entire hike is 9 miles  one-way, with 6,000 feet of elevation gain to an end elevation of 7,800 feet. This hike usually takes two days each way and is described as “long, steep, and grueling.” The alternate route is from the Stuart Lake trail head a couple of miles up Eightmile road off Icicle Creek Road. The trail up to Colchuck Lake is 4.75 miles  long and gains 2,100 feet; another 1.75 miles bring hikers to the south end of the lake and Aasgard Pass, which climbs 2,200 feetin 0.8 miles.  Aasgard Pass is a steep scramble which is dangerous to descend in snow. The Aasgard Pass route has also been described as “in very bad taste” because it bypasses the beauty of the lower basin to get to the upper basin first. The two routes can be combined to form a loop if the hiking party has two cars, a bicycle, or otherwise arranges transportation between the trail heads.

The United States Forest Service restricts access to the Enchantments permit area, which includes five zones. The three most popular zones are the Snow Zone (from Icicle Creek up to Snow Lakes), the Colchuck Zone (the area surrounding Colchuck Lake) and the Core Enchantment Zone (the Upper and Lower Enchantment Basins and surrounding peaks). The other zones are the Stuart Zone (the area around Stuart Lake and the northern approaches to Mount Stuart) and the Eightmile/Caroline Zone (Eightmile Lake, Eightmile Mountain, Cashmere Mountain, and vicinity).

As we were unsuccessful in obtaining backpacking permits, we have decided to thru hike Enchantments in one day (12 hours to be specific). This can be planned rather easily, hikers usually start at the Colchuck Lake trailhead and hike out via Snow Lake trail.  Ideally, you can leave car at each trailhead or go with local shuttle (https://loopconnectorshuttle.com/). 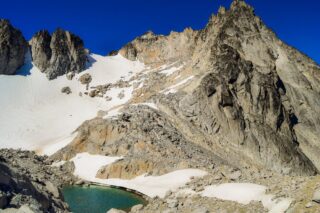 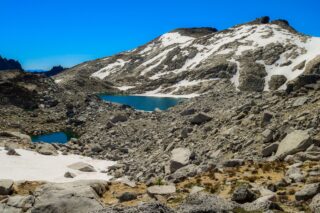 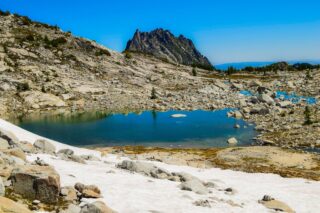 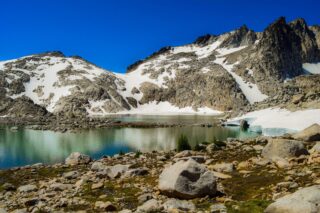 The “trail” up the Aasgard pass sometimes becomes difficult to follow, but if you look for faint tread and cairns, you will be fine. We saw people climbing straight up on giant boulders, it is somewhat easier to follow the official trail.

The views are simply awesome throughout the ascent, stretching from nearby Colchuck Peak and the aquamarine of Colchuck Lake to Glacier Peak and Mount Baker in the distance. 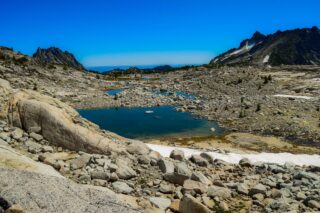 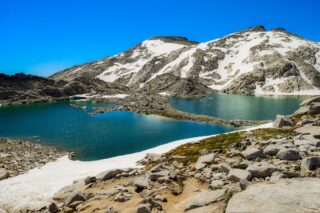 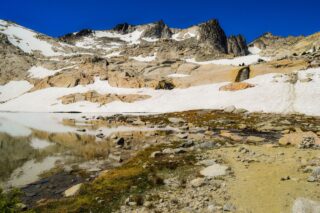 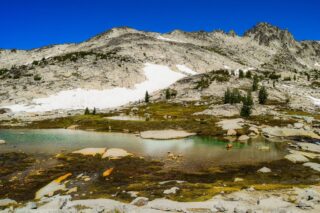 At the top, these are the Upper Enchantments. The lakes in this section sit in a stark moonscape of rock, scree and ice below the long ridge culminating in the summit of Dragontail Peak, just above the pass. The trail snakes its way through grey lichen-covered rocks along the shores of Tranquil and Isolation Lakes before dropping steadily to the broad plateau beneath Little Annapurna (so named for its resemblance to the much taller Nepalese peak).

Beneath Little Annapurna, the barren rock gives way to a lusher alpine meadow, where the creek connecting the lakes meanders gently before tipping into a deeper channel and speeding downhill. The first larches appear as the plateau ends abruptly in expansive views over Crystal Lake and the Ingalls Creek valley below. The trail now heads east and down a steep draw to Inspiration Lake. 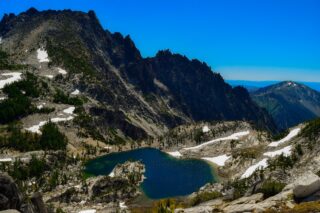 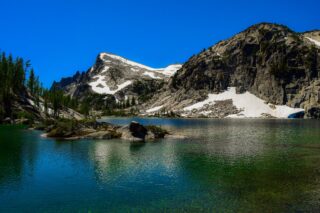 This azure pool tucked deep in a basin below Enchantment Peak marks the beginning of the Middle Enchantments. Inspiration is perhaps the most dramatic of the lakes, with granite rising steeply on three sides and a stand of larches on the opposite shore. The trail proceeds through these larches before dropping a short distance down to Perfection Lake.

The Lower Enchantments are marked by the heights of McClellan Peak on one side and Prusik Peak on the other. Under McClellan’s lofty summit sits Leprechaun Lake, an irregular pond draped between ribs of granite topped by dense stands of larches. One rib forms a peninsula that nearly bisects the lake. Travel over narrow rock ledges along Leprechaun’s shore before heading over open terrain and then climbing above steep slopes on its twisting way down to Lake Viviane, the last (or first) of the lakes.

We are now following Snow Lakes trail back to its start on Icicle Creek Road. The descent is quite steep and takes what might feel like forever. 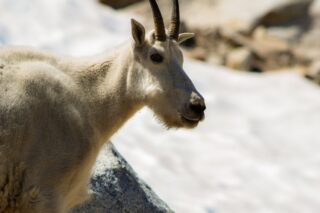 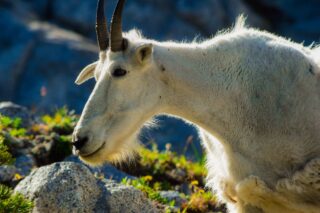 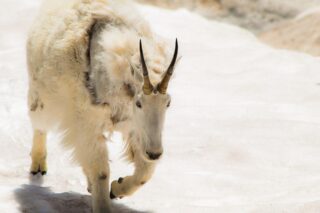 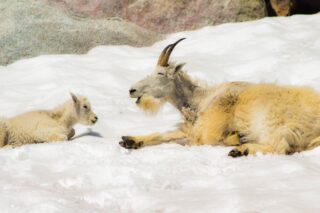 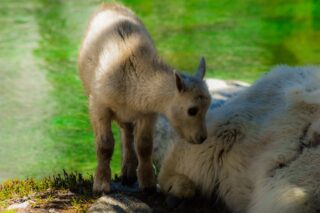 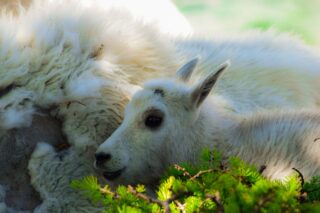 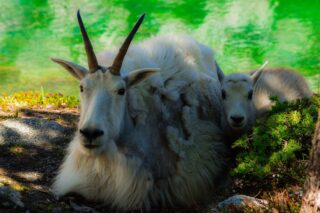 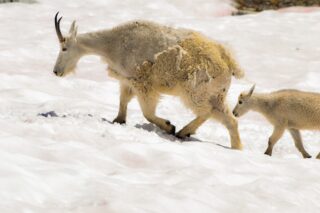