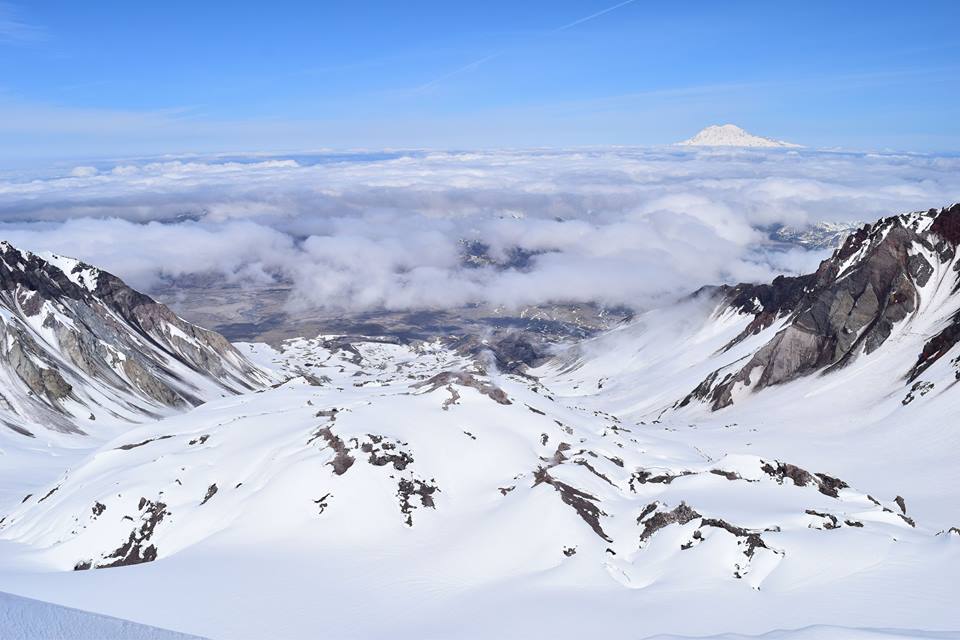 Mount St. Helens is an active volcano located in Skamania County, Washington, in the Pacific Northwest region of the United States. It is 50 miles  northeast of Portland, Oregon and 96 miles south of Seattle, Washington. 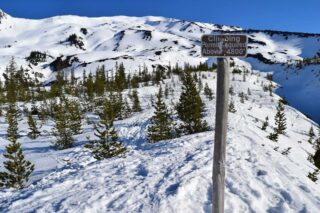 Mount St. Helens is most notorious for its major eruption on May 18, 1980, the deadliest and most economically destructive volcanic eruption in U.S. history. Fifty-seven people were killed; 250 homes, 47 bridges, 15 miles of railways, and 185 miles of highway were destroyed. A massive debris avalanche triggered by an earthquake measuring 5.1 on the Richter scale caused an eruption that reduced the elevation of the mountain’s summit from 9,677 ft to 8,363 ft , leaving a 1 mile wide horseshoe-shaped crater. The Mount St. Helens National Volcanic Monument was created to preserve the volcano and allow for the eruption’s aftermath to be scientifically studied.

As with most other volcanoes in the Cascade Range, Mount St. Helens is a large eruptive cone consisting of lava rock inter layered with ash, pumice, and other deposits. The mountain includes layers of basalt and andesite through which several domes of dacite lava have erupted. The largest of the dacite domes formed the previous summit, and off its northern flank sat the smaller Goat Rocks dome. Both were destroyed in the 1980 eruption. Prior to the 1980 eruption, Mount St. Helens was the fifth-highest peak in Washington.

Mount St. Helens is a popular climbing destination for both beginning and experienced mountaineers. The peak is climbed year-round, although it is more often climbed from late spring through early fall. All routes include sections of steep, rugged terrain. A permit system has been in place for climbers since 1987. A climbing permit is required year-round for anyone who will be above 4,800 feet on the slopes of Mount St. Helens.

The standard hiking/mountaineering route in the warmer months is the Monitor Ridge Route, which starts at the Climbers Bivouac. This is the most popular and crowded route to the summit in the summer and gains about 4,600 feet in approximately 5 miles to reach the crater rim.  Although strenuous, it is considered a non-technical climb that involves some scrambling. Most climbers complete the trip in 7 to 12 hours. 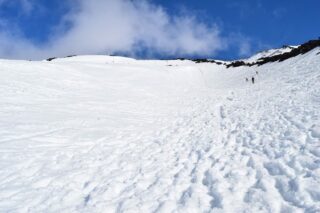 The Worm Flows Route is considered the standard winter route on Mount St. Helens, as it is the most direct route to the summit. The route gains about 5,700 feet in elevation over about 6 miles from trailhead to summit but does not demand the technical climbing that some other Cascade peaks like Mount Rainier do. The route name refers to the rocky lava flows that surround the route. This route can be accessed via the Marble Mountain Sno-Park and the Swift Ski Trail.

After obtaining a permit via the recreation.gov website, we decided to spent April weekend on Mt. St. Helens. Hiking around the nearby caves and camping by the reservoir, we decided to climb on Sunday. Up at 5am, at the Marble Mountain by 6am, then a quick gear check and we were off.  We took the Swift Ski Trail #244  for 2 miles until we were above the treeline. Sun was shining and clouds were breaking, giving us a view of the whole mountain. We put spikes on our shoes and sunblock on our face before pressing onward.

From there the trail reaches a sign reminding you of your permit, and from there it starts to get steep. There were many climbers with skis on their packs, or just cross-country skiing all the way up the mountain. It must have been real tough for them climbing up, but real fun for them on the way down. Climbing up on snow to the ridgeline and to the crater rim took around 6 hrs total. Clear skies and sunshine, amazing views of Rainier, Hood and Adams, Jefferson in the far back. Reached the summit around 1pm. We could clearly see the crater and some fumaroles. It is better to stay away from the crater rim cornice as it might be unstable. We started our descent around 2pm and glissaded down almost all the way to the valley. Rest of the way we were hiking in wet snow back to the TH.  We got back to our car around 4pm, making our climbing trip 9 hours total.